“It has come to our attention that the Israeli government has ignored repeated warnings about the abuse of human rights, shutting down the internet in Israel and mistreating its own citizens and those of its neighboring countries” Anonymous wrote in a statement.

The leaked data contain names, email addresses and ID numbers apparently belonging to Israeli officials. The group also said "Israeli Gov. this is/will turn into a cyberwar." Before this hack, the group hacked Bank of Jerusalem , 700 hundred Israeli websites, including the Israeli Defence Ministry, the IDF blog, the President's official website and much more.

The Israel’s finance minister has acknowledged the recent wave of attacks, saying the government is now waging a war on a “second front.” 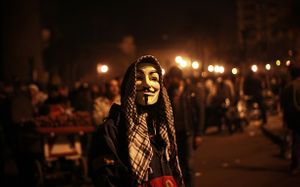